Start a Wiki
WKBS-TV, UHF digital channel 48, is a MyNetworkTV-affiliated television station licensed to Burlington, New Jersey, United States, which serves the Philadelphia, Pennsylvania television market. The station signed on in 1965, and is still active today.

The station first signed on the air on September 1, 1965, and was originally owned by Kaiser Broadcasting. It was the second independent station in the Philadelphia market, having signed on almost six months after WIBF-TV (channel 29, later WTAF-TV and now WTXF-TV) and two weeks before WPHL-TV (channel 17). WKBS-TV's studios were located at 3201 South 26th Street in South Philadelphia, and its transmitter was located on the Roxborough tower farm in Philadelphia. The station struggled at first, in part because it signed on only a year after the Federal Communications Commission (FCC) required television manufacturers to include UHF tuning capability. However, WKBS was on stronger financial footing than WPHL and WIBF, and quickly established itself as the leading independent in Philadelphia, retaining the top spot for almost a decade. In 1973, Kaiser sold a minority interest in its operations to Field Communications, which owned WFLD-TV in Chicago. WKBS' schedule was typical of most independent stations of the time, with a mix of off-network syndicated programs, children's programs, movies, and local-interest shows, including a dance show hosted by local radio personality Hy Lit, which also aired on at least three of Kaiser's other stations: WKBD-TV in Detroit, WKBG-TV in Boston and WKBF-TV in Cleveland. In addition, WKBS aired shows produced by other Kaiser stations, such as The Lou Gordon Program from WKBD. In a controversial 1972 episode, then-Philadelphia mayor Frank Rizzo, frustrated with Gordon's line of questioning, walked out of the interview. In the mid-1970s, WKBS also aired ABC shows that WPVI-TV (channel 6) preempted in favor of local programming, and during the 1976-77 season, it aired NBC shows preempted by KYW-TV (channel 3). In 1977, Kaiser left the television business and sold its share of the stations, including WKBS-TV, to Field. For most of the next few years, WKBS waged a spirited battle with WTAF for first place among the city's independents. However, by the early 1980s, WTAF was the entrenched top independent in Philadelphia.

WKBS-TV operated a small news department during its early years, producing a newscast at the station's morning sign-on time, and providing news updates during the course of the broadcast day. Among channel 48's first on-air reporters was Jim Vance, who started his television career with WKBS in 1968 before moving to WRC-TV in Washington, D.C., in 1969.

In the 1970s, WKBS-TV attempted a 10 p.m. newscast. However, the experiment failed, apparently because the Philadelphia market was not ready for a prime-time newscast. From the late 1970s until the station went dark, channel 48 would air news updates anchored by Pat Farnack. Starting in 1982, the station aired a news simulcast of CNN2 (now HLN) with local news inserts at 10 p.m. on weekdays. Marty Jacobs also hosted a public affairs program.

By June 1983, it was sold to Taft Broadcasting.

On 1986, Field has over 30 stations and it is planning to buy again WKBS. On November 5, 1986, Sunbeam sold WKBS to its former owner, Field Communications. WKBS remained as an independent station until 1995, when it was affiliated with UPN. On 2006, it became a MyNetworkTV-affiliated station. 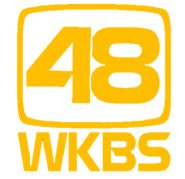 Logo without the location.

Station ident from 1984, under the Taft Ownership

Retrieved from "https://alternate-universes.fandom.com/wiki/WKBS-TV_(L210%27s_vision)?oldid=5229"
Community content is available under CC-BY-SA unless otherwise noted.