WHQ-TV, virtual and VHF channel 7, is an NBC-affiliated television station licensed to Texaville, Ohio, United States. The station is owned by Sunbeam Television, and its callsign stands for "We Have Quality."

The station signed-on the air on March 7, 1955. The station has been an NBC affiliate from its beginning (and the only major television station in Texaville not to have changed its network affiliation); it borrowed the NBC affiliation from WTXC-TV's (now WTGS-TV) secondary affiliation.

WHQ-TV, channel 7, in Texaville, Ohio, now concludes its broadcast day. WHQ-TV, with studios and offices located at 33 West Beacon Road, is owned and operated by Sunbeam Television Corporation in Miami, Florida. WHQ-TV operates with a total power output of 497,000 watts visually, and 127,000 watts visually, as authorized by the Federal Communications Commission. The entire staff and management of WHQ-TV invites you to join us again tomorrow, for another day of entertainment and news for the Texavillian community. 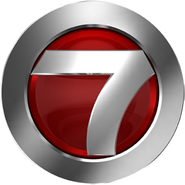 Current logo, which is the same as WSVN and WHDH.
Add a photo to this gallery

Let's All Be There ident from 1984.
Add a photo to this gallery

Retrieved from "https://alternate-universes.fandom.com/wiki/WHQ-TV?oldid=1120"
Community content is available under CC-BY-SA unless otherwise noted.