Start a Wiki
WFLD-TV, virtual channel 32 (UHF digital channel 31), is a Fox owned-and-operated television station licensed to Chicago, Illinois, United States. The station is owned by Field Communications. On cable, WFLD can be seen on Comcast Xfinity channel 12 in most parts of the Chicago area.

The station first signed on the air on January 4, 1966, as an independent station. WFLD was founded by a joint venture of the parties that each competed individually for the license and construction permit to operate on UHF channel 32. Field Enterprises—owned by heirs of the Marshall Field's department store chain, and publishers of the Chicago Sun-Times and the Chicago Daily News—was the station's majority partner (with a 50% interest) and was responsible for managing WFLD's day-to-day operations; they were led by veteran broadcasting executive Sterling C. (Red) Quinlan. The station originally operated from studio facilities located within the Marina City complex on State Street. Channel 32 was christened the "Station of Tomorrow" by an April 1966 Sun-Times article because of its innovative technical developments in broadcasting its signal. It also broadcast news programming from the Sun-Times/Daily News newsroom.[3] From the fall of 1967 to summer of 1970, WFLD aired the final hour of CBS' Saturday daytime schedule from 12:00 to 1:00 p.m., in lieu of the network's owned-and-operated station WBBM-TV (channel 2).

n March 1969, Field entered into an agreement to sell WFLD to New York City-based Metromedia for $10 million. At the time, the Field interests were concerned about running afoul of the Federal Communications Commission (FCC)'s recent scrutiny of commonly owned multiple media outlets within the same market. The deal ultimately fell through nearly one year later in February 1970; following the collapse of the Metromedia purchase attempt, Field instead purchased the 50% share of WFLD that was held by its minority partners.

WFLD was noteworthy for being the longtime home of the local B-movie program Svengoolie. There were two versions of the showcase: the original incarnation of the series began on the station on September 18, 1970, under the title Screaming Yellow Theatre, with local disc jockey Jerry G. Bishop doing scary voices and later wearing a long green wig while portraying the character. Bishop became such a hit with viewers that the show was popularly called "Svengoolie" after his character (although the title of the program did not change), and this version lasted until late in the summer of 1973. The second version premiered on June 16, 1979, with Rich Koz as "Son of Svengoolie", and ran on channel 32 until January 25, 1986. The show was revived on WCIU-TV (channel 26) when it became an English-language independent station in December 1994, and has aired there locally ever since, and began to be broadcast nationally on MeTV in April 2011.

Field Enterprises sold controlling interest in WFLD to Kaiser Broadcasting in May 1972. When the deal was completed in July 1973, the two companies' new partnership resulted in WFLD joining Kaiser's stable of UHF independent stations in San Francisco, Boston, Philadelphia, Cleveland and Detroit.[11][12][13] In June 1977, Kaiser ended the partnership when it sold its share of the stations back to Field Enterprises. In addition to carrying the traditional fare of sitcoms, drama series, children's programs and first-run syndicated programs, the station also aired movies—initially European releases that were dubbed into English—and local public affairs programming during this period.

To counterprogram against its more established VHF rivals, channel 32 offered older cartoons, older off-network sitcoms, documentaries, drama series, westerns and live sporting events; although, it easily trailed its biggest competitor, WGN-TV (channel 9, formerly a CW affiliate, now again as an independent station), in the ratings among Chicago's independent stations. The station broadcast daily from 10 a.m. to about 1 a.m. during the 1970s, except from September to December, when the station signed on at 7 a.m. Beginning in 1978, WFLD signed on daily before 6 a.m. In 1975, WFLD acquired the local syndication rights to The Brady Bunch and The Partridge Family; two years later in 1977, the station won the rights to a stronger slate of cartoons such as Woody Woodpecker, Tom and Jerry, Popeye and The Flintstones.

Channel 32 strengthened its syndicated programming slate in 1979, when it acquired the local syndication rights to M*A*S*H, All in the Family, Happy Days and What's Happening!!. The station also acquired the rights to I Love Lucy that year, and later added Battlestar Galactica, Buck Rogers in the 25th Century, The Six Million Dollar Man, Wonder Woman and Star Trek in 1982. WFLD began to beat WGN-TV in ratings as a result of its stronger programming acquisitions, and the two stations continued to go head-to-head throughout the 1980s. WFLD scored no big ticket program acquisitions in 1980 or 1981; however, in 1982, the station won the local syndication rights to popular series such as Three's Company, Taxi and Mork and Mindy.

Primary logo from 1977 to 1986 and secondary logo until present. 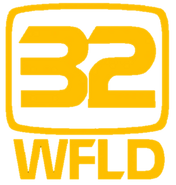 Logo without the location

Station ident from 1986 to 1995.
Add a photo to this gallery
Retrieved from "https://alternate-universes.fandom.com/wiki/WFLD-TV_(L210%27s_vision)?oldid=1276"
Community content is available under CC-BY-SA unless otherwise noted.